Cancer Immunotherapy May Be Getting a Makeover 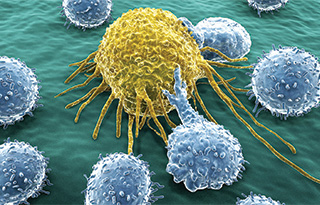 Several researchers have high hopers for using cancer immunotherapy as a way to help patients suffering from cancer. At the National Cancer Institute, Nicholas Restifo, M.D. is at the head of a project that combats the use of T-cells to help reduce tumors and put a halt on cancerous cells. The main focus is to look into the genes that are found in cancer cells that are the usually the most aggressive ones causing the cancer. By the researchers figuring this information out they can decide which genes are most crucial to be eliminated by the T-cells. The technology CRISPR was used on tumors found in melanoma cells to halt the replication of the genes in the cancer cells so they could modify the genes to react to T-cells in order to destroy the tumor. The group were able to locate nearly 100 possible genes that could be playing a role in T-cells supressing tumors. They identified a gene, APLNR, which is a protein known as the apelin receptor and has a pro con ability. It can be a factor at times that develops certain cancers but it was also one of the first genes to be found that responds to the T-cells. With the continuation of this study the researchers hope to have an end goal of finding why some patients do not respond as successfully to immunotherapy
as others and how they can adjust their methods to work for those patients as well.
Posted by Sarah Strang at 2:41 PM