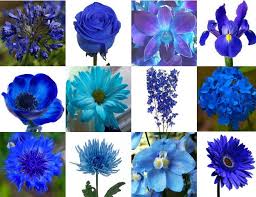 An article found in the New York Times discusses the reality of blue flowers.  Studies have found that less than ten percent of the 400,000 known flower species are actually a true blue color.  Scientists along with horticulturists have unsuccessfully tried to force blueness onto flowers using breeding and genetic engineering; however, Japanese scientists have recently found a way to create a true blue Chrysanthemum that complies with the standards of the Royal Horticulturists Society.  The scientists published their methods in the Science Advances journal in hopes to successfully create blue flowers of other species.  Under certain conditions, specific plants are sensitive to changes in pH which creates a blue pigment in flowers that are typically red, orange, and purple.  The methods used by the scientists are already naturally done in the wild; blue flowers in nature tend to result from modification to a red pigment that shifts the acidity.  In petunia's a mutation causes breakage of their pump which alters the pH causing a blue pigment, morning glories shift between blue and pink when they are opening and closing based on changing pH, and hydrangeas will produce a blue pigment if their soil becomes acidic.  These new breakthroughs are outstanding; however, it will a while before we see blue flowers in stores since they require a special permit to sell genetically modified plants.
Posted by Unknown at 11:00 PM