Scientists in Germany, led by Matthias Meyer from the Max Planck Institute for Developmental Biology, have successfully recovered hominid DNA from cave dirt in Europe. Other researchers had previously isolated animal DNA from dirt; such as Dr. Poinar and Michael Hofreiter, who successfully identifying 16 different animal species from a tablespoon of dirt taken from Colorado. 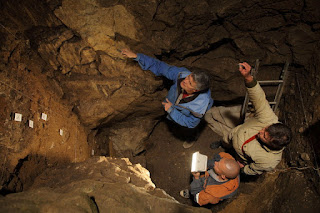 The scientists took samples from four caves across Eurasia. They had previously analysed DNA from Neanderthal and Denisovan skeletal remains. They amplified the presence of mitochondrial DNA and began to analyze the DNA recovered. They were able to identify the presence of ancient DNA from these ancient human relatives. This process could revolutionize the way human evolution is studied, with physical skeletal and archaeological remains no longer necessary to determine th presence of hominids.