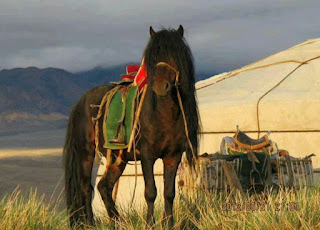 Horse sacrificed by fierce nomad living in central asia more than 2,000 years ago have provided new insight into how people tamed the wild animals and bred them to their needs.  The scythians roamed over a vast swath from siberia to the black sea.  They were known for their equestrian battle skills, shooting bow and arrow while riding, and for the brutal treatment of those they defeated (blinded their slaves or drank the their blood). The scientist using horse skeleton to extract DNA and they were able to decipher the genomes for 11 of the 13 horse from the scythian mound, they analyzed DNA of the horse dating 4,100 years ago that belong to neighbor tribe sintashta. Who had already figured out how to use horse. From the DNA the horse are bred for certain characteristics such as thicker stockier forelimb. many genetic change also showed that change were related to the "neural crest" the cell that become the spinal cord during embryonic development, but migrate to various part of the body. The finding point out the impact that human had on the environment and the evolution of the other species for millenniums.


https://www.nytimes.com/2017/04/27/science/horses-genetics-domestication-scythians.html
Posted by Unknown at 11:23 AM