Telling the sex of a Sea Turtle: Not as easy as you'd think! 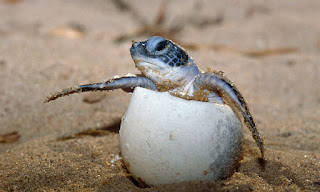 A study being conducted by Florida Atlantic University is shedding new light on the process if sexing baby sea turtles before hatching. With the changing  climate, sea turtles are seeing a rise in females compared to males, what once was a 1:1 ratio is now very skewed. The common reason behind sex in turtles was thought to be nest temperature, on which females prefer a warmer nest to the males. A vey simple way to remember the temperate differences is "hot chicks and cool dudes." This saying may not hold true since researchers have hypothesized that CIRPB (a RNA-binding protein) known to respond to temperature, possibly shows differential gene expression in sea turtle hatchlings that are both well-differentiated and those that are not developed enough to be distinctly male or female. They say that temperature alone does not determine the sex of the turtles, but it is a protein that is influenced by the temperature.

The more scientists know about the sea turtles the more they can help. Both the Loggerhead and the Leatherback are considered threated and endangered. The skewed ratios of male and female hatchlings will only effect the population negatively in the future. Further studies may save these impressive creatures, but only time will tell.

Posted by Andrew Tonnesen at 6:00 PM