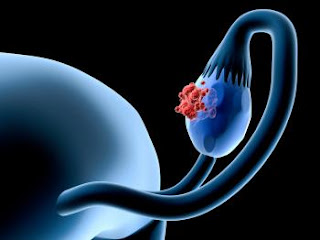 Ovarian cancer is one of the leading causes of cancer death in women. It has been fairly long known that the genes we inherit from our parents affect the chances of somebody getting ovarian cancer, but new research has shown that there are 12 new genetic variants that have been found associated with the risk of this kind of cancer. The study included about 450,000 samples, and they were looking to identify the genetic background for the most common cancers. A novel genotyping technique was used and allowed the researchers to identify almost 500,000 single nucleotide polymorphisms. According to this study, a woman’s genes are responsible for 1/3 of her risk of developing ovarian cancer.


Reading this article hit home for me because ovarian cancer runs in my family. Knowing that my genetic makeup accounts for 1/3 of my risk of developing this cancer definitely makes me a little uneasy. Luckily, this research also showed that there are ways to reduce my chances (like being on an oral contraceptive), so at least I know that there are things I can do to decrease my risk. Now that this data has been published, I think it would be a good idea for primary care physicians and OB/GYN’s to strongly encourage women who come from a family history of ovarian cancer to be screened very early on, and to be offered/suggested ways to decrease her chances of developing it.