Most Cancer-Causing Mutations a Result of Errors During Replication

More information on mutations that cause cancer:  http://www.cancer.net/navigating-cancer-care/cancer-basics/genetics/genetics-cancer 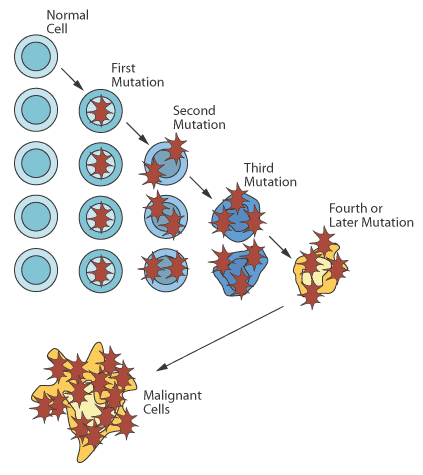 It is a well known fact that genetic mutations are one of the most common causes of cancer.  However, a new study has shown that most mutations that cause cancer occur during DNA replication, rather than being due to environmental conditions.  However, certain cancers were an exception to this rule, such as lung cancer.  In addition, the article points out that several mutations are needed for cancer to form, so random mutations are not always the sole cause.  This is illustrated in the above image.  This discovery could possibly explain why certain types of cancer are more common than others.  An example that the article uses is that brain cancer is less common than colon cancer.  Cells in the colon divide much more often than those in the brain, leading to more opportunities for mutations to occur.