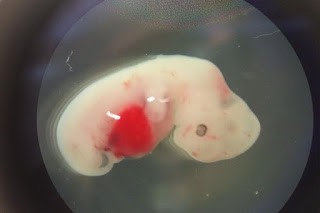 Scientists have recently discovered two ways to create hybrid "human-animals" that have the potential to save thousands of people every year. The feat that has been accomplished is that an organism has been created that contains cells from two separate species. Just like when humans receive transplants, one way to do this is to introduce the organs from an organism of one species into an organism of another species. However, like human to human transplants, those organs could be rejected by the recipients immune system. The more advanced process they have been able to come up with is introducing cells from one species into the embryo of another species, thus allowing them to grow together, avoiding rejection.

Pigs are very similar to humans, so the outlook for this medical advance is certainly promising. In this study, when the human cells were introduced into the pig, it was critical that the timing was perfect, as improper timing lead to fatal results for the pigs. This will take some time to perfect, and if these cells were introduced into humans as of right now, it would likely fail. However, if they could increase the number of human cells that the pig embryo could tolerate, this experiment would be much more successful.

Though this research is extremely controversial, I would have to admit that I think the ethical concerns are well worth the risk. It upsets some people that scientists are creating hybrids and combining humans with animals because it is, after all, quite strange and foreign. However, the results would be beneficial to all of mankind. Thousands of human lives could be saved each year by growing organs from these chimeras. Overall, if the process can be perfected, it will be well worth it.