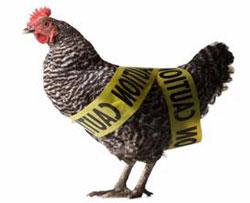 The World Health Organization says that is noticed a change in the bird flu virus that is currently spreading in China. The risk of the disease spreading easily between people is low. The genetic mutation have been seen from birds and infected people, showing that the flu viruses are changing constantly. In 2013, the H7N9 strain of bird flu showed up in China and only sickened people that were in close touch with chickens or other infected people. In a briefing on Wednesday, the U.N health agency said that about seven percent of recent cases, scientists have identified genetic changes suggesting the virus are resistant to Tamiflu. The mutation in the H7N9 virus became more deadly to birds but it still unclear as too how it may effect humans.

This is an interesting study about genetics. The mutation that was caused in the virus that effected the chicken could be a potential threat to the humans. This is vital since chicken is one of the most consumed produce. It is important to our protein intake and several more.