Smart and Adaptable Predator in our Forests, Parks, and Cities

In parts of Eastern Canada and U.S. there is a new predator on the prowl. Most know this canine as simply a coyote, but it is actually a coyote and wolf-hybrid some are calling a Coywolf (Canis latrans var). The coywolf has the intelligence and stealth of a coyote and the size and strength of a wolf. This canine is rapidly becoming one of the top predators in our area. While wolves and coyotes prefer to hunt in different terrain, wolves like forests and coyotes like open space, the coywolf is well adapted for hunting in both, and their cries are a mixture of both breeds. They were first documented in 1919 and population has since grown into the millions. They are opportunistic predators mostly preying on small mammals, but will take advantage of anything larger if it is wounded or not paying attention. 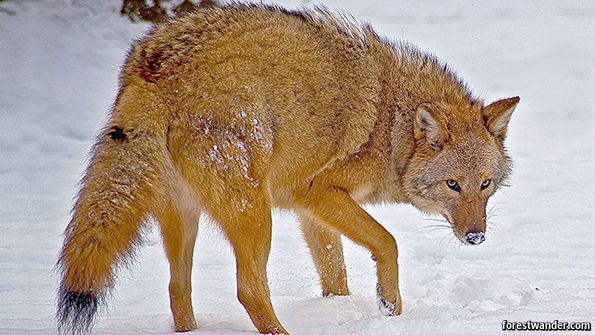 I think the concept of cross breeding is really cool. Its incredible to see how two predators can breed with each other and make a whole new breed that is much more adaptable and has the potential be more successful.