The evolution of Seahorses

Evolutionary biologists sequenced seahorse DNA to understand their evolution, one like no other sea creature. 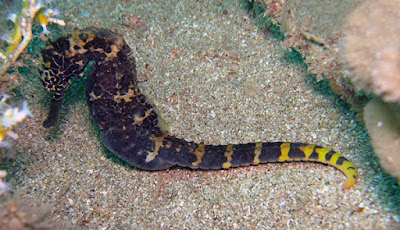 It has neither a pelvic fin nor tail, males give birth, they have no teeth, and bony plates reinforce its body; the seahorse is an evolutionary oddity and it is the prime subject for six evolutionary biologists that want to understand why. Their findings were astounding; they found that the loss and duplication of genes and the loss of regulative elements directly contributed to a rapid change in evolution.

Professo Axel Meyer identified, from genomic sequencing, that several genes that are present in fish teeth as well as human teeth development, are not found in seahorses. They evolved by the way they eat food, they suck up prey rather than bite and chew.

Curiously, they found that gene duplication influenced pregnancy in males. Duplicated genes can create an entirely new function, and this just so happens to be the pregnancy in males. The genes probably only regulates the process by which the babies leave the brood, but there still is much to learn.

The seahorse is an excellent organism to study because is shows how evolution can rapidly change and organism's appearance and function.
Posted by Unknown at 11:05 PM