Why Clone Sheep — Don’t They All Look Alike Anyway?

20 years ago the first sheep was cloned. Dolly the sheep. Many wonder why clone sheep? 20 years ago scientist didn't just want to clone sheep to make a copy of some type of animal. As said in the article "Why Clone Sheep — Don’t They All Look Alike Anyway?", scientist goal was to create a transgenic animal. The purpose to create transgenic animals was so that they could ne used to make stem cells or different proteins so that they could find cures for diseases. The first thing they sought in curing was diabetes's. I think this is a good reason for cloning because if it can find a way to cure human diseases that is beneficial.

After questioning why clone sheep? people wondered how you could tell them apart or what the difference is, and what they do to clone them? Sheep are actually not very difficult to tell apart according to doctor Kevin Sinclair from The University of Nottingham in Britain. He compared telling sheep apart like telling dogs apart. He used the example of telling a difference between a beagle and a chocolate lab. Although, when looking at a bunch of the same breed together that's when It gets more tricky to tell them apart. The way that Dr. Sinclair told them apart was through their personalities. He mentioned that some sheep would act like the moms of the herd. An actual method they use to identify a cloned sheep or anything cloned in a group is by drawing "blood from all the animals, isolate the DNA from the nuclei of the white blood cells and then start comparing them with each other". In order for this method to work there has to be more then one clone in a group, if there is only one you will not be able to tell the difference. Like twins clones share the same nuclear DNA, therefore looking at just the DNA is not enough. One has to look deeper in the cell such as the mitochondria and the energy control centers. Cloning is very interesting and only seems to be getting bigger and something scientist are doing more often. 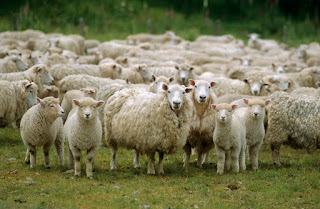