Two-headed sharks are real and they are being found more frequently worldwide. This mutation appears to be a lethal gene for the two-headed sharks since the reported two-headed sharks were found dead as pups or still in their birthing sac. There have been reports internationally about the findings of two-headed shark embryo being found from Mexico to the Indian Ocean. The majority of the two-headed shark fetuses are a member of the species; the blue shark. In the wild, there is more likely a chance of a mutation to occur in blue sharks' genetics due to the large number of offspring they are able to produce. However, scientists are starting to see this same mutation in laboratory captivity of sharks where there was no exposure to infections, chemicals, or radiation. The main reason for this mutation of two-headed sharks appears to point at a genetic disorder. Other theories for the malformations include environmental factors such as dwindling down gene pool due to overfishing and water pollution. There are some that consider this to be a viral infection or a metabolic disorder. Conservationists are seeming to take this as evidence of overfishing most of all to blame. Overfishing causes fish to inbreed and their genetic diversity to shrink. This causes mutations to happen. This is a difficult topic to research because although there are more sightings of two-headed shark embryos, it is still a random and rare process to find them. 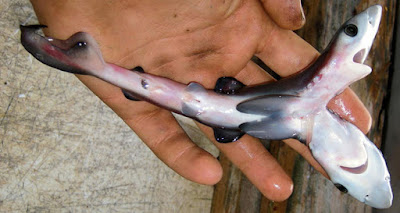 Genetic mutations are becoming more and more of a frequent news story for animals. I think, and have been reading many articles to support my thought process, that most genetic mutations in animals in the wild come from environmental factors. The way we treat this world it is surprising that more animals aren't horribly mutated. In marine animals, this is an especially prevalent issue. There are over two million tons of sewage, industrial and agricultural waste polluting our water by discarding every single day. When the water is full of carcinogens and chemicals the natural cycle will respond with more genetic deformities in animals. Realizing that overfishing minimizes the gene pool and causes for more inbreeding and thus mutations makes you realize that overfishing hurts not only the fish we are killing but the ones we leave in the water as well. If a two-headed shark mutates to be able to live past sexual maturity and fall into it's place in the food chain, the waters will have a much scarier version of Jaws than anyone ever wanted to see. I believe funding for conservation efforts will minimize genetic deformities because it will provide a larger gene drift.  I believe that there will be more horror stories about mutations in animals as the future comes, with it hitting marine animals even worse. This is especially true if shale energy and the fracking industry continue to pollute our waters.