It is an accepted fact that the land bridge that connects North and South America formed around 3 million years ago due to a collision of tectonic plates. However, new evidence suggests that this might not be the case, and instead the bridge actually formed much earlier, around 4-8 million years ago.  The spark of this geological controversy being nothing other than  research on the evolutionary and population genetics of Eciton army ants. 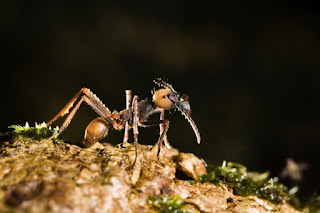 The study on the ants was conducted by Corrie Moreau, who was looking into the diversity present among the different ant species. She conducted her research by analyzing different DNA samples of the ants from each of the 9 species through a technique known as genotyping. This allowed Moreau to compare the genetic variation between ants belonging to different species, as well as individuals belonging to the same species. The genomic data suggests that the ants crossed over from South America to North America far earlier than 3 million years. The ants don't have wings, so in order for this to be possible they would need to have traveled the distance on dry  land.

This doesn’t mean for certain that the ants crossed over by means of a land bridge though, as they could have floated across the water on a tree branch or other form of debris. However, other geologic and biological data also support the idea that the Panama land bridge formed earlier than 3 million years ago. Such evidence includes fossilized teeth belonging to ancient primates that suggests they traveled across continents far earlier than 3 million years ago.

Although nothing concrete can be determined from this study as of yet it is interesting to see how genetic research is applicable across many different fields. It just goes to show that you never know where research will take you. You start out looking into the diversity of ants and end up in a major geological controversy.