Tardigrades are microscopic animals well known for their abilities to withstand many extreme environments and conditions. Most recently though, tardigrades were found to have a protein that helps protect against radiation. This discovery was made by Takekazu Kunieda, a researcher from the University of Tokyo, and his team. By sequencing the genome of the tardigrade and inserting pieces of tardigrade DNA into mammalian cells the research team was able to determine which parts of the tardigrade DNA were giving the organism its protection. From this process the team discovered that a protein known as Dsup is responsible for protecting the animal from the stress of radiation. The mammalian cells that had the protein Dsup from the tardigrades inserted were found to be able to supress x-ray damage by 40%. 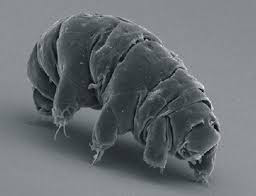 This discovery opens up many possibilities for the world of medicine regarding the improvement of stress resistance of human cells. An application of the use of the protein in humans could be protection from radiation for those who work in nuclear facilities. This discovery also opens up more doors for the world of medicine and agriculture because tardigrades are also known to easily survive in times of severe dehydration. If this protein could be identified, humans could work and survive under extreme conditions without getting dehydrated and plants could grow in extreme environments since dehydration would not be an issue.
Posted by Emily Casey at 6:11 PM