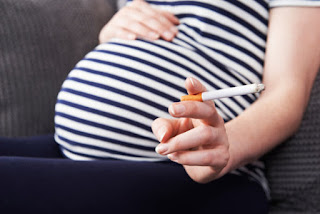 The Real Effect of Smoking During Pregnancy

A study of over 6,000 mothers and their children was recently conducted, and it was one of the largest of its kind. The purpose of the study was to prove that smoking while pregnant can chemically modify the DNA of a fetus. The researchers divided the mothers into three categories, sustained smokers who smoked daily throughout pregnancy(13%), non-smokers women who never smoked(62%), and any smoking which were women who smoked occasionally or during the beginning of pregnancy(25%). Researchers analyzed methylation in newborns DNA, DNA methtylation is an epigenetic mechanism used by cells to control gene expression.
The results showed that in sustained smokers 6,073 places of DNA were identified as chemically modified when compared to the DNA of the non-smokers; about half of these genes could be identified in a specific location. The genes that were identified were related to lung and nervous system development, smoking related cancers, birth defects, and cleft palates. The researchers believe that these birth defects are related the DNA methylation of these genes and are working on further studies to confirm.
Posted by Steve Salvatore at 10:23 AM