Could all Blue-eyed Humans have a Common Ancestor? 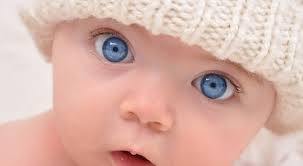 Recent studies have found that people with blue eyes all have a common ancestor.  A research team at the University of Copenhagen has discovered a genetic mutation that could have taken place between 6-10,000 years ago! This genetic mutation is what causes the blue eye color in humans today.  The mutation affects the OCA2 gene, which created a switch that can turn off the ability to produce brown eyes.  This gene codes for the P-protein, which helps produce melanin.  Melanin in our body defines the color of our eyes, hair, and skin.  The switch that is created from the mutation, does not turn the OCA2 gene off completely, but it reduces the amount of melanin that is produced, which basically dilutes the brown eye color to blue.  This switch could cause different mutations if the gene was turned off completely.  If the gene is turned off completely, this could lead to albinism. A person with albinism will not produce any melanin.

The amount of melanin in a person's iris will decide what color their eyes will be.  The color could range from brown to green, depending on how much melanin is in their eye.  Blue-eyed humans have a small degree of variation in the amount of melanin that is in their iris, while on the other hand, brown eyed humans have a large amount of variation from person to person.  The fact that blue-eyed humans do not have much genetic variation from person to person could prove that they all have a common ancestor.  In the research that was done, it was discovered that blue eyed humans have the same switch which is also located in the same spot on their DNA.  The blue-eyed mutation is neither negative or positive, humans acquire many mutations that do not affect their ability to survive.

This research was extremely interesting to me.  As a person with blue eyes, it is cool to see that I have a genetic mutation that changes the color of my eyes.  It surprised me that the same mutation that I have could also cause albinism.  It makes you think if the amount of melanin a person has in their eyes or even skin has something to do with how you react to sunlight.  It is said that people that have lighter eyes are more sensitive to the sun, and a lighter skin color could also be sensitive to the sun.  Does more melanin make you less sensitive to the sun?
Posted by Unknown at 9:30 AM