Life on Earth: More Closely Related to Extraterrestrial Than We Thought?

Back in Biodiversity and Evolution, I learned a little bit about the potential origins of life on earth.  One common theory was that a comet or meteor crashed into earth carrying the building blocks of life.  It sounded so absurd at the time, and I quickly dismissed the assertion.  Other proposed sources of life on earth were a lightning strike causing a chemical change in certain molecules and genetic material in deep sea vents.  A recent study, however, claims that genetic material could have, in fact, come from comets.  Genetic material, specifically RNA is made of ribose.  Scientists and researchers analyzed an artificial comet containing ices, and their findings point towards the ices containing ribose.  Further, nitrogenous bases and amino acids are commonly found on crashed comets.  So, the discovery of ribose is leading researchers to believe that the components of life did, in fact, come from these comets.  Unfortunately, the study has not yet been validated using real comets.  The researchers used only a simulated comet under simulated conditions, so the next step is to analyze the contents and interactions of macromolecules on a real comet (if possible). 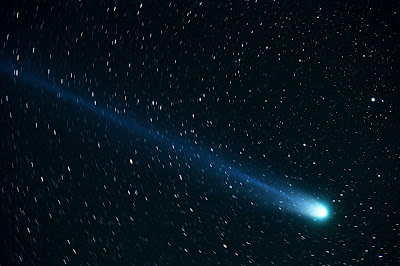 As it turns out, the experiment carried out in April 2016 mentioned above is far from the only experiment of its kind.  In 2012, a similar experiment was carried out, and researchers found 26 amino acids, six of which were classified as diamino acids.  This was important because it could contribute to the construction of peptide nucleic acid, which is the precursor to terrestrial DNA.

I think that the research on the origins of life are very interesting, but far too hypothetical to place too much trust in.  I find it hard to believe that scientists know enough about space and its environment to accurately create a situation where life could be created.  However, each study makes it seem like a more and more probable cause of life.  Personally, I find it incredible.  To think that our basic components of life came from space is a little bit strange.  Could it mean that life already exists elsewhere in the universe?  Is life on earth really just a variation of an extraterrestrial life form?  These are questions that could be answered as scientists continue their research on the origins of life on earth.