Just this year, an understandably coined "minimalist" bacteria was discussed in a recently published scientific article, "Design and Synthesis of a Minimal Bacterial Genome" (Hutchison III et al. 2016). Going by the name "JCVI Syn3.0", this tiny bacteria only consists of 473 genes, significantly smaller than our (approximate) 20,000. Before I get into exactly how Syn3.0 was created, it needs to be said how monumental this bacteria is for our understanding of past evolution, and what it may mean for our future. 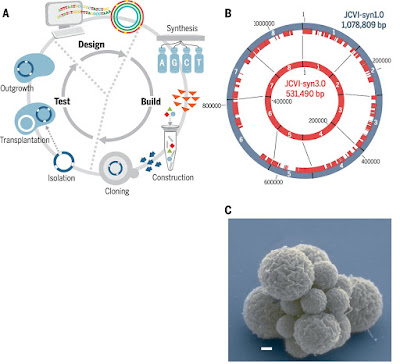 This bacteria directly supports the evolutionary theory that organisms started out as a single cell, which further supports the "universal common ancestor" proposed by Darwin in his most famous book, On the Origin of Species. If this bacteria can survive on less than 500 cells, it doesn't seem too far-fetched that organisms billions of years ago were able to do the same, evolving over time to develop into something else (or not). More than this, in the future, being able to synthetically produce a minimally-celled organisms may lead to cheaper and faster production and distribution of antibiotics, fuels, drugs, or even certain foods.

How was Syn3.0 synthesized in a lab? According to the actual scientific literature, scientists used "whole-genome design and complete chemical synthesis to minimize the 1079–kilobase pair synthetic genome of Mycoplasma mycoides JCVI-syn1.0" (Hutchison III et al. 2016), and after multiple cycles of design, synthesis, and testing, were able to produce a viable cell. At 531 kilobase pairs and 473 genes, it's smaller than the majority of living organisms today. However, much is still unknown about this bacteria - it contains 149 genes with currently unknown biological functions.

I'm personally very excited to see where the discovery and in-depth research of Syn3.0 will lead. Maybe more discoveries will lead to more evidence supporting the theory of evolution, discovery of a new species/phylum/something else, or nothing at all. It's exciting to see an organism produced in a lab that is able to survive on such few genes, and will hopefully prove to be beneficial to our population in the future.