Down-Regulation of Inc13 (IncRNA) May Contribute to Celiac Disease Symptoms

Mostly everyone has heard of Celiac disease, especially due to the rising popularity of gluten-free foods in social media. There has been a notion that eating foods lacking gluten are good for you - however, it's only going to affect you if you have this disease. According to the Celiac Disease Foundation, Celiac disease is an autoimmune disorder that affects about 1 in 100 people worldwide - unfortunately, many people don't even know they have the disease and live their lives undiagnosed. A genetically predisposed condition, Celiac disease is an immune response in the small intestine against gluten, which is a protein commonly found in foods like bread. When people who have Celiac disease ingest bread, the villi in their small intestine become irritated and damaged, leading to bloating, fatigue, diarrhea and weight loss - but can lead to worse problems in the long-term if preventative action is not taken. 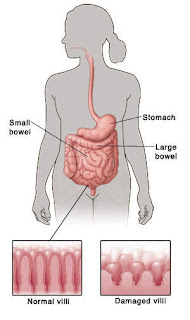 
Currently, there is no known cure, but a recent study published in Science sheds more light on what may be causing its symptoms. Long noncoding RNAs, abbreviated lncRNAs (or "junk RNA"), regulate various biological processes in our body. The study characterized and studied a specific lncRNA, lnc13, that plays a large part in symptoms of the disease. According to the study,

"Upon stimulation, lnc13 levels are reduced, thereby allowing increased expression of the repressed genes. Lnc13 levels are significantly decreased in small intestinal biopsy samples from patients with celiac disease, which suggests that down-regulation of lnc13 may contribute to the inflammation seen in this disease. Furthermore, the lnc13 disease-associated variant binds hnRNPD less efficiently than its wild-type counterpart, thus helping to explain how these single-nucleotide polymorphisms contribute to celiac disease." (Castellanos-Rubio et al., 2016) 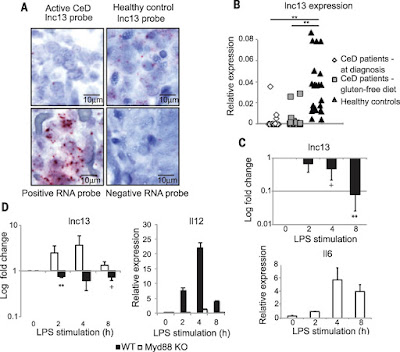 Lnc13 is present in almost half of the global population, but a small fraction - about 1% - develop an immune reaction to gluten. What this study found was that those with Celiac disease have a significantly lower amount of Lnc13 in their small intestine, which indicates two things: 1) So-called "junk RNA" is more important than previously believed, and 2) If those with Celiac disease are supplied with a higher level of lnc13 in their intestine, they may express less severe symptoms, or none at all.

I think this is a great advancement for a more in-depth understanding of this disease, by giving us a better look into the gene expressions that contribute to this disease. Hopefully in the near future, knowing more about lnc13 will allow professionals in the field of health science research to develop a method for targeting and treating, or just diagnosing sequences of DNA that contribute to this disease, possibly leading to a cure.