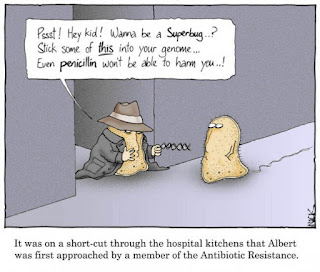 Bacteria have short generation times, resulting in the increase of their population sizes.  Humans are promoting antibiotic resistance in multiple ways such as; not finishing their prescriptions, taking other people's prescriptions, and using antibiotics in agricultural settings.  We could be entering a post-antimicrobial era as a result of selection pressures that humans are creating for bacteria.  I think that people need to be educated and reminded that misusing antibiotics will eventually lead to a time when infections will be untreatable.  The only way we can slow down the increase the spread of resistance genes is to reduce the selection pressures that bacteria are being exposed to.