You Can Be Allergic To Vibration

How Does Allergic Reactions Occur?

Allergic reaction is a type of condition where the immune system reacts differently to a foreign substance. It is the body's way of responding to protect foreign substances from attacking harmful agents such as bacteria and or toxins. When it is overreacted a certain stimuli causes the mast cells (white blood cells) and the skin to release histamine and inflammtory chemicals into the bloodstream  which may cause major skin reactions.


The National Institute of Health (NIH) discovered  an unusual gene mutation that triggers an irregualar response to vibration. It stimulates mast cells and inflammatory chemicals from the immune system causing an allergic reaction. Researchers from the National Institute of Health, studied on three families who have experienced this disorder. They concluded that, a single gene mutation in the ADGRE2 gene shared among the family members caused skin rashess and hives when exposed to any type of vibration. The ADGRE2 gene is a type of protein where the alpa and beta subunits interact closely together, but people with vibration allergy the beta subunit produces signals inside the mast cells that leads into breakdown of the white blood cells. The NIH team is considering on finding out what happens to the alpha subunits after vibration. Future plans are taking into consideration to learn more about this disorder. 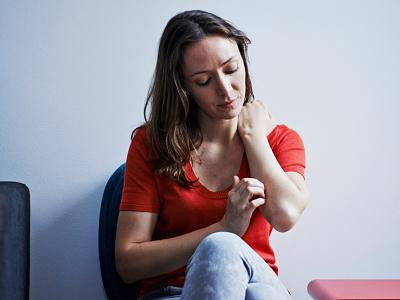 It was interesting to understand the interaction between physical stimulus and how it affects the mast cells with certain mutated genes. It shows that, any unusual responses in our body can lead into severe allergic reactions that we may not ever think of. Genetics associated with allergic reactions is benefical to understand how various types of proteins potentially cause major health defects.
Posted by Bindiya Surti at 4:46 PM