"Whether you're territorial, a girlfriend stealer or a cross dresser, it's in your genes" 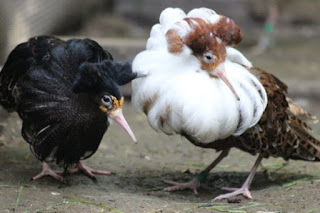 Certain gestures and behaviors have known to be major contributors to the realm of mating, especially in birds. It was discovered that some male birds may be geneticly disposed to behave one way over another in pursuit of a female. Researchers at University of Sheffield identified the genes, of a wading bird called the ruff, that determine mating behavior. The male ruff dedicate their lives to attracting females with no desire for parental care. Within the mating system, three types of males were discovered. The territorial males have impressive plumes with great, distinguishable color. The non-territorial males have white feathers and make attempts to steal mates from the garish territorial males. Then, there is the ‘cross-dressers’. These males mimic females to avoid territorial aggression while stealing mates. It was determined that these genes were encoded by a ‘supergene’.

My first thought after reading this was how the same concept may apply to humans. How much of our own mating behaviors influenced by genetics versus the environment? Would the genetic disposition only be applicable to males or females as well? In that case, we must also consider sexuality in its entirety. Does it vary between regions? Ages? I would be interested to follow and learn more about the expansion of this concept.