Scientists Spot Gene That Could Make Bacteria Resistant to All Antibiotics

Discovered in China, scientists have identified a gene that makes a common, dangerous bacteria resistance to “last resort” antibiotics call polymyxins. The gene was found in the Enterobacteriaceae germ harbored by pigs and people in Southern China. The gene is called MCR-1. Some bacteria with the strains have the potential to cause epidemics, which as the study author Jian-Hua Liu says, “these are extremely worrying results”. Jian-Hua Liu is a professor at South China Agricultural University in Guangzhou, China. 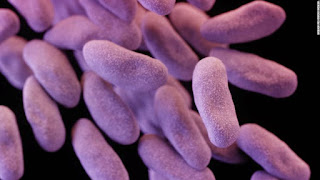 The two most common polymyxins are colistin and polymyxin B. They are considered the last class of antibiotics in which resistance is incapable of spreading. Colistin resistance has always just been a chromosomal mutation, however, this new gene was found on a plasmid. A plasmid is a free floating piece of DNA that is easily copied and transferred. This makes MCR-1 have a greater potential for spreading to other bacteria types.
Liu points to the fact that the discovery of a gene like MCR-1 is the stepping stone to the emergence of a gene allowing multi drug resistance. This is an issue because there would no longer be a way to fight infections, pneumonias, or other potentially fatal bacterial diseases.
It is thought that extensive use of antibiotics in agriculture may be been the catalyst for bacteria to develop a resistance gene. Colistin is widely used on farms in South China, and pigs are more susceptible to get the gene than humans which means that the gene was first existent in animals and then transmitted to people.
A great quote from Liu is, “the emergence of MCR-1 heralds the breach of the last group of antibiotics. Although currently confined to China, mcr-1 is likely to emulate other resistance genes... and spread worldwide.”


I feel that this article is very alarming as it suggests that it is because of the overuse of antibiotics that bacteria are evolving to have a resistance to it. After watching the movie Contagion, epidemics are a terrifying thing if it hits in the modern times. There would be absolute chaos. It is amazing to me the power of nature and evolution as this is a classic example of survival of the fittest, where the non-resistant bacteria die off and the resistance bacteria live and thrive. It is very scary stuff, as well, that the MCR-1 was transmitted from animals to humans; as in today’s society agriculture and animal products are a huge market.
Original Article
More on MCR-1
Posted by Melanie Cucunato at 12:14 AM