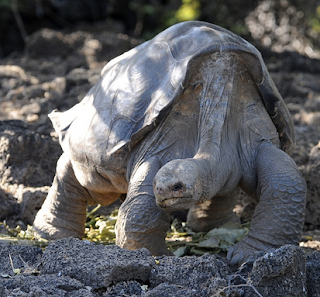 On Ecuador's Galapagoes Islands, there is a new species that have been identified. There are the only species that is so genetically distinct from the rest of the tortoises on that island. There are 250 animals living on the Santa Cruz island. The new species, Chelonoidis donfaustoi, and very distinct from the other tortoises after analyzing that there are 25 mitochondrial DNA mutations that separate the two groups. Based on data, Michel Milinkovitch, a conservation geneticist at the University of Geneva, states that the two groups are so distanced that they are considered to be two separate species.
I find it kind of cool to discover more species that were not found earlier. Physically, they don't look that distinct from each other. However based on the data and the DNA mutations found, the two groups are considered to be two separate groups. In order for this species to be able to survive, researchers would have to look into how to protect them from other species they are endangered from. I wonder how many more species we are yet to discover which may look like species that are known but are distinct because of DNA mutation.
Posted by Heena Laroiya at 8:56 PM