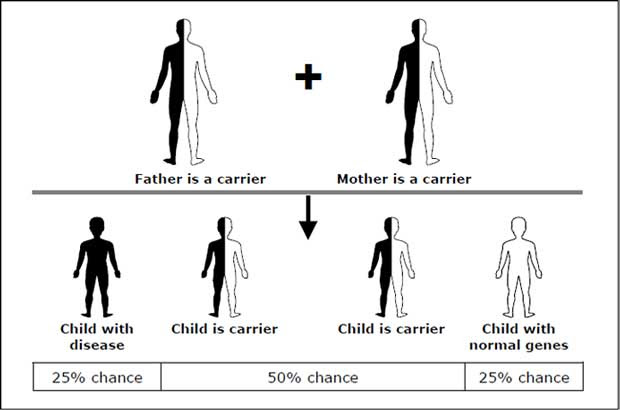 New approach estimates the average number of mutations per person that cause disease when inherited from both parents. Humans carry an average of one or more mutations per person that can cause severe genetic disorders or prenatal death when two copies of the same mutation are inherited. The numbers were found through long-term collaboration between medical researchers and a unique community that has managed detailed family histories for many generations.

DNA sequence variants are harmless when a person carries only one copy but if both copies are present they can causes diseases such as cystic fibrosis. Recessive disease mutations are much more harmful even if they are only a single copy. The question is how common are the recessive disease-causing mutations. Previous studies have been based off of parents that have been related. However, this method mixes up the effects of genetics and socioeconomic factors. In some places, marriage between close relatives correlates with poverty. This is a bias because in these cases the children have a higher disease and death rate due to poor nutrition or lack of medical access.

New methods ignore the socioeconomic factors. To learn more about recessive disease mutations, a large 13-generation family tree that traces the ancestry of more than 1,500 living people was used. This was used to come up with an estimate for the number of recessive disease mutations carried by the group’s founders in the 18th and 19th century. Using this information, it is estimated that there were around 3 mutations of this type for every 5 people among the founders.

Surprisingly, the recessive disease mutation estimate for humans is similar to those from fruit fly and fish species even though these organisms have a different total genome size.