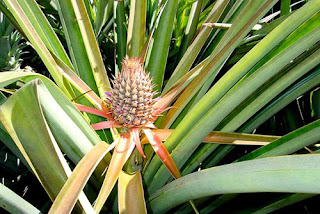 The pineapple plant is an interesting and complicated plant known to have gone through many evolutionary adaptations in order to thrive in the water-limited environments it is grown in. The plant has a very complicated evolutionary history, which it shares with grasses such as sorghum and rice. Drought has become a major issue that is responsible for a majority of global crop loss and, therefore, researchers have been looking for ways to make currently existing essential crops drought-resistant. Recently an international team of scientists has completed the genome sequence of the pineapple plant, which has allowed for more insight into its evolutionary history which has allowed it to become drought resistant.

Genetically, ancestors of the pineapple and grasses like rice and sorghum experienced several doublings of their genomes and by tracking the remnants of these whole-genome duplications the team was able to trace the evolutionary histories of these drought resistant crops. By doing this the group was capable of finding that the pineapple genome actually has one less whole-genome duplication than the grasses that share common ancestors with the plant, thus making it the best comparison group to study the genetics of drought resistance in plants.

By completing the genome of pineapple plant the researchers also found more information regarding the crassulacean acid metabolism (CAM) method of photosynthesis the plant uses. Pineapples use the CAM method of photosynthesis, in which plants can close the pores in their leaves during the day and open them at night allowing them to lose very little moisture during the day and absorb and fix CO2 at night to release the following day during photosynthesis. The process has evolved independently in 10,000 plant species, and differs from the C3 and C4 pathways of photosynthesis used by crop and tropical plants.  From the completed genome the researchers found that some of the genes that contribute to CAM photosynthesis are actually regulated by the genes the govern the plant's circadian clock. This is the first time scientists have found a link between regulatory elements of CAM photosynthesis genes and the regulation of the circadian clock, which allows the plants to determine the time of day and adjust it's metabolism accordingly.

Finally, the researchers also discovered that CAM photosynthesis evolved strictly through genetic reconfiguration of the molecular pathways of C3 photosynthesis. This means that all plants contain the genes that are needed for CAM photosynthesis and the evolution CAM photosynthesis can be achieved in different plants species by rerouting the plants preexisting pathways. This finding can lead to huge developments in producing drought-tolerant varieties of several essential crops.

I find this article very exciting and interesting. This is article discusses plant genetics in great depth and is very interesting and informative in regards to the evolution of plants genomes and genetics. I find it so interesting to think that by completing a single genome these researchers were capable of discovering the history of the evolution of the pineapple plant and find the genetic process behind how the pineapple plant developed the ability to be drought resistant and perform CAM photosynthesis. The findings are also very interesting and can lead to so many possibilities in producing drought resistant crops.

For a link the original article click here
To find out more about the different types of photosynthesis click here
For more articles regarding the completion of the pineapple genome click here
Posted by Unknown at 5:14 AM