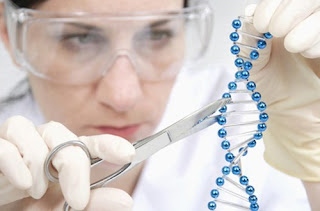 Imagine a gene-editing tool that is more cost-efficient, faster, easier, and more precise than previous techniques. Imagine crops being genetically engineered to have drought-resistant qualities, disease-resistant, having a better nutrient composition - even void of food allergens. Imagine new enzymes can be created for water treatment or laundry detergents. Imagine, even, that one day, HIV, cystic fibrosis, even malaria is non-existent! In the near future, this may all be a reality, thanks to a new gene-editing technique that is only three years old - already a massively invested-in business - called CRISPR.

CRISPR is an acronym for 'clustered regularly interspaced short palindromic repeats', which sounds like a mouthful. It has the ability to delete, repair or replace selected genes. Here's how it works:

Bacteria keep a record of viral infections, which form part of their immune system. These viral DNA sequences are repeated and interspersed with unique sequences. When the viral DNA sequences are copied into an RNA strand along with addition of an enzyme called Cas (typically Cas9), these viral strings will be on the look out for other, identical viral DNA pieces. When they 'find' one, the Cas enzyme acts like a scissor, snipping viral DNA up - stopping an unwanted infection! 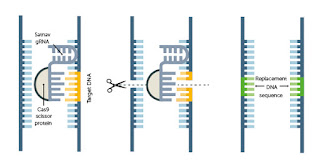 To get into specifics, scientists synthesize a gRNA molecule of roughly 20 bases to match the gene sequence of interest, then link it to Cas9. One 'cut' on the sequence deactivates the gene. Two 'cuts' remove the gene. To replace a gene, the gene is removed, then a normal copy of the gene is added to the cell, which replaces the empty spot in the DNA sequence left by the removed gene.

CRISPR certainly has benefits, as genes can now be modified with more ease. However, some see CRISPR and other gene-editing techniques, like ZFN and Talens, as contributors to the eugenics movement. This is a real concern. If scientists have the ability to modify genes in human embryos (accomplished using CRISPR last April), so-called 'designer babies' may become the norm, which can also lead to unintended mutations. Going beyond ethical dilemmas, CRISPR is a relatively new technique, so it's still in the works. Currently, no CRISPR-edited cells have been able to be returned to humans, and many consequences of its use are still unknown. A summit was held in D.C. last year, which outlined some regulations: basic gene-editing research is allowed, including in human embryos, but the modified cells are not allowed to be used in establishing a pregnancy, as the risk is both high and unknown. Instead, some scientists argue CRISPR should only be used to treat non-inherited disease in human cells.

CRISPR has merit, and if used for good, has a bright future ahead of itself. The scientific, industrial, and agricultural worlds have already invested in it. While it is still a very new technique, it has the potential to shape the world in ways we can't yet fathom, and that's something everyone can look forward to.